SuPope Francis denounces “gender theory” and cohabitation: where is the Holy See Press Office? Why are they censoring the Pope?

On March 21st, 2915, Our Holy Father again denounced the evil ideology that is destroying society and families: gender ideology.
Then there is the ideological colonization of families, methods and proposals that are in Europe and also overseas. Then that mistake of the human mind that is gender theory which creates a lot of confusion. So the family is under attack.
All of this begs the question: where is the Holy See Press Office? Why are they not issuing translations in major languages of the world? And why are they issuing severely truncated versions: why are they erasing all and any references to the obvious increasing opposition of the Holy Father to the Adulterist and Homosexualist Parties positions, as advocated by the innovators in the scandalous and heretical mid-term relatio?
The censored version, eliminating all reference to the evils of gender theory, and cohabitation before marriage may be read here.

From Vatican News (www.news.va) screenshots (in respectively Italian, French and English show the insidious manipulation by the Holy See Press Office. Readers can see for themselves that only the Italian version mentions gender theory. 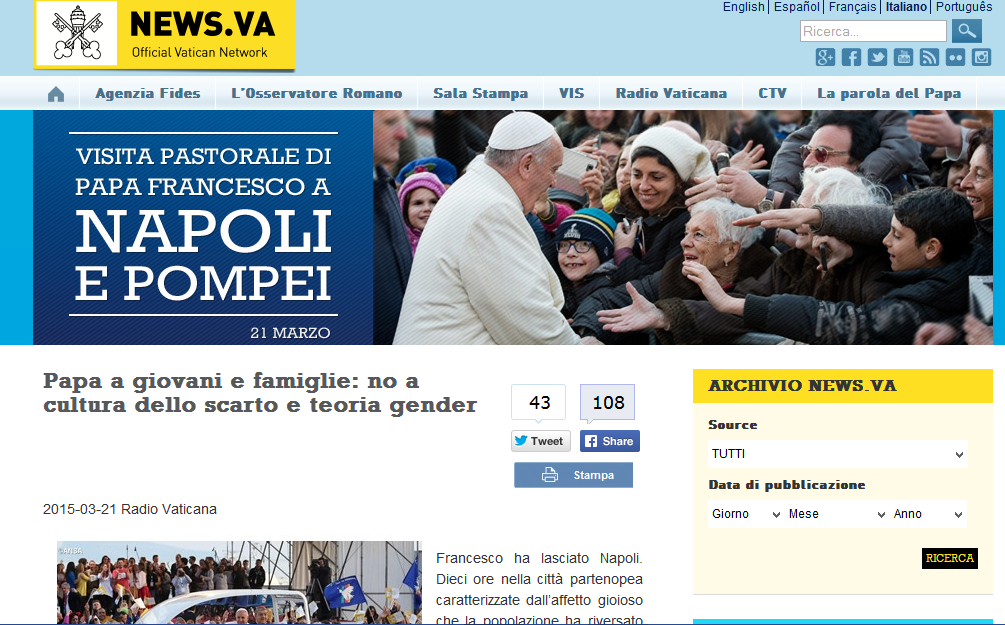 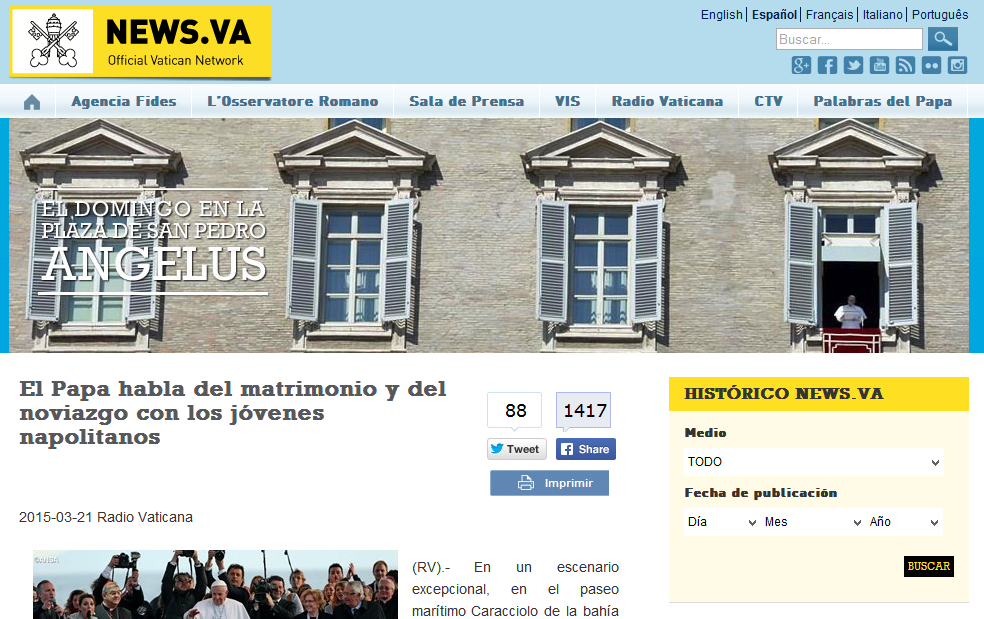 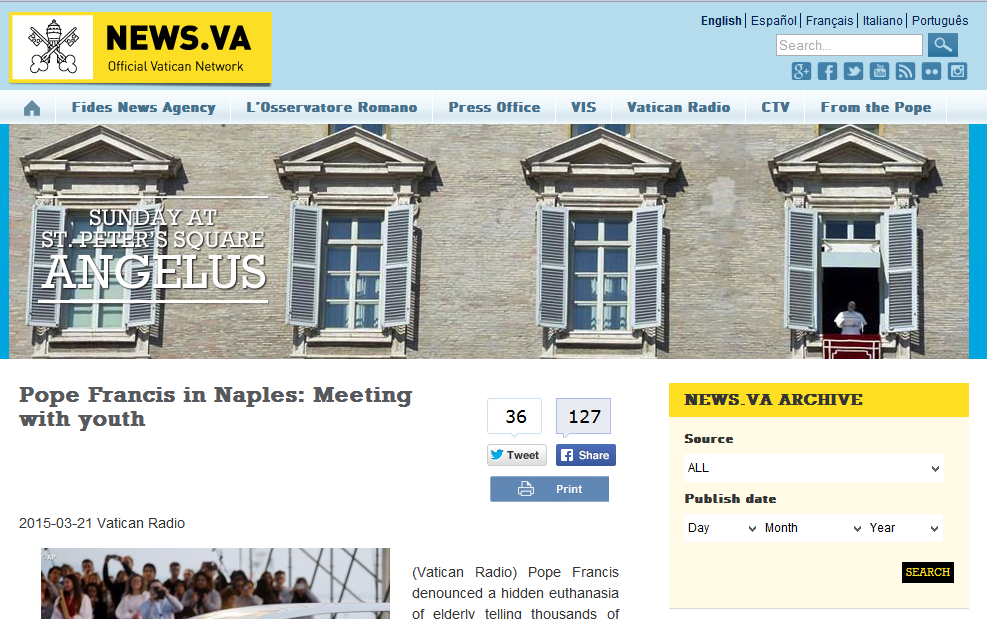 Some Thoughts on Gender Theory

What is “Gender Theory” ?

Just to re-fresh from last week, ” gender theory “, is the THEORY that you choose your own sex. This THEORY is in direct opposition with God and the Catholic Church’s teachings. GENDER FACT, to put it simply is that boys are born with boy parts and girls are born with girl parts. ” Gender theory “, would have us think differently ; it would say that each person would choose from one of 51 different options of gender. Actually, according to ” gender theory ” the person can be one or more genders at the same time, or even change their gender at will. Like I stated in last weeks post , ” gender theory ”  is all about the sexualizing of our children and society. It is an attack on the family and on the dignity of the human person as a son or daughter of Almighty God. From Genesis Chapter 1 we read “[27] And God created man to his own image: to the image of God he created him: male and female he created them.”  I emphasize, ” male and female he created them ” and that God created us to His image. We cannot credit ourselves for being created, we did not create ourselves.

This post, unlike most others is going to contain some opinion. However, these opinions will be based on practical observations and facts. Lately I have glanced over certain pew studies  on when young Catholics leave the Church. 79 percent of those who have dropped the name “Catholic” and claim no religious affliation of any kind, have done so by age 23 in the United States. I assume that this statistic is comparable here in Canada . The first observation is that by the age of 23 is when most young adults are probably just leaving or at least in college or university. What is it about College or University that is causing young Catholics to leave the Church ; could it be their exposure to ” gender theory ” ? I think so !

Interestingly, in doing some recent investigative work on the origins and implementation of  ” gender theory “, I came across some very dark information. There are entire schools and universities that are dedicated to implementing ” gender theory ” into every course and curriculum of University and College. The one institute that I found has specialists that teach professors on exactly how to implement ” gender theory ” into all courses taught in university or college including Catholic religious classes. Here is the link . This institution and its professors are involved with every area of higher education. This was always suspected, but to see it is another thing.

So, there we have it ; “Gender theory” is in the colleges, the universities, and the high schools. It was only a matter of time before the big push would come from the social engineers to have ” gender theory ” taught to our beloved children at their most vulnerable age, in elementary school. The social engineers just can’t seem to wait for Catholics to leave the Church at the age of 23, no, they want them damaged and destroyed in grade 3. For those who don’t know, that is when the actual ” gender theory ” will begin being taught in publicly funded elementary schools in Ontario. Here is a piece of the actual curriculum that will be used in September in Grade 3 classes all through Ontario

See how the social engineers craftily try and sneak in ” gender identity ” and ” sexual orientation ” into the grade 3 teaching. They sneak it in with a person’s allergies, family background, and skills and talents!!! How crafty!!!

So, why would Catholics leave the Church if they subscribed to this THEORY? Because it is not at all compatible with the natural law, Christian, or Catholic teaching. From the Gospel of Matthew, Chapter 6 we read “[24] No man can serve two masters. For either he will hate the one, and love the other: or he will sustain the one, and despise the other. You cannot serve God and mammon. ”

As a parent, catechist, and member of the Catholic Church, this whole situation concerns me greatly! In the eyes of the social engineer’s , ” gender theory ” is likened to a death blow against God and His Holy Church. We know that this will never be, because of God’s promise in Matthew Chapter 16 “[18] And I say to thee: That thou art Peter; and upon this rock I will build my church, and the gates of hell shall not prevail against it.” However, this doesn’t mean that many, many souls will not be lost to this evil teaching called ” gender theory “. We have seen the effect it has had on college and university students. Shortly, we will see the effect it has had on high school students. Do we really want to see what it will do to our youngest of children? In a sense, we are in uncharted waters! We as parents, Christians, and Catholics must stand up to this gravest of evil ! Parents as First Educators is spear heading the fight against this evil in Ontario, here is their website. Please sign up for their emails and consider donating to a truly just cause.

What else can we do? I’m glad you asked ! We can properly take responsibility for our children’s education and teach them the truth about God and His natural law. We have to catechize our children! That’s right, we have to catechize our children. We, as parents are the first educators, not the state, not the Bishop, and not the priest on Sundays! Even our very own Bishops in Ontario, for the most part, have compromised with this evil doctrine by allowing it to be implemented in so-called Catholic Schools. The exception is the Ottawa Archbishop Terrence Prendergast , who is actually publicly concerned for the souls of children ! This means that we as parents will have to get off our butts and probably learn or re-learn what the Catholic Church actually teaches. Sunday Mass attendance will just not cut it in this environment. Up until a few years ago, I probably had a grade 3 level of Catholic education concerning the Church, even though I took grade 12 religion class at a Catholic high school. In fact, I passed religion class every year all through elementary and high school ; with almost ZERO CATHOLIC CATECHESIS !!! Religion class is not the same as catechesis. BREAKING NEWS FLASH :  In Ontario, very little actual catechesis is taught in publicly funded elementary or high schools, Catholic or not !

For a very thorough and simple catechism I would suggest you pick up a copy of  The Question and Answer Catholic Catechism by Servant of God Father John A. Hardon , S.J. If you prefer something a little more advanced I would suggest Apologetics and Catholic Doctrine  by Archbishop Michael Sheehan.

Til next time, may God protect us from the world, the devil, the social engineers, and ourselves !